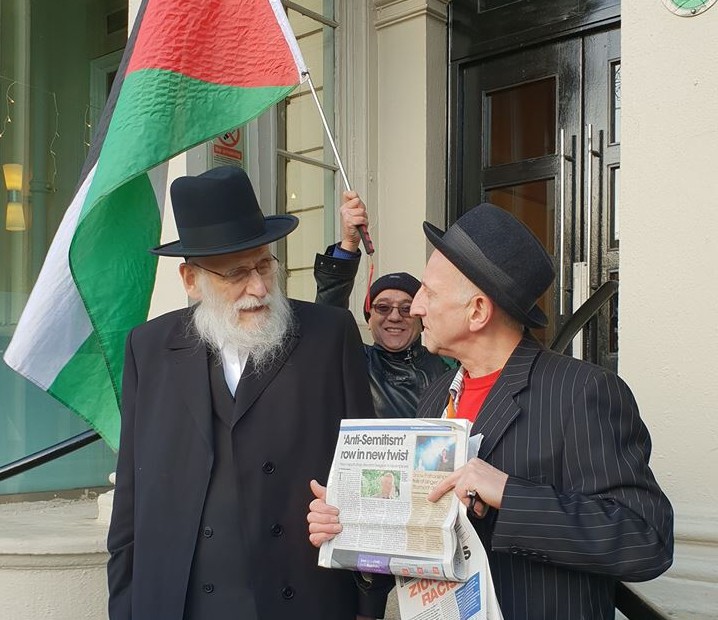 Pete Gregson was so concerned about the adoption of the IHRA definition examples by the Labour Party that he organised a mass flouting of these absurd and dangerous rules. His union, the GMB, is now attempting to expel him for anti-Semitism. The hearing was yesterday, and we wrote the statement below in support of his position. (You can read more about the case here.)

The GMB Union has suspended, and seeks to expel, Pete Gregson for anti-Semitism, according to the IHRA definition and accompanying examples adopted by the union. We believe that the IHRA definition examples are fundamentally misleading and should be abandoned. They have been deliberately written so as to equate Israel, the self-declared Jewish Homeland, with all Jews, in order that criticism of Israel (and particularly the nature of Israel as a Jewish state) becomes regarded as criticism of Jews and is deemed anti-Semitic and inadmissible.

Since the Talmud, Jews have looked forward to a future time of Messianic redemption and return to Zion. That traditional belief (now understood by different Jews in different ways) is not to be confused with the modern ideology of political Zionism.  Zionism, the creation and maintenance of a Jewish state in the historic land of Israel, is not intrinsic either to Jewish identity or to Jewish belief. It is a political position and has always been a subject of argument. Jews, as well as non-Jews, can recognise that a state that is defined by, and prioritises, an ethnicity or religion is an essentially racist endeavour. Rejection of Zionism is not rejection of Jews or Jewishness and is often made by Jews. To assume all Jews are Zionist –that Jews share a political opinion by virtue of their Jewishness – is itself anti-Semitic.

In adopting the IHRA definition with examples, the GMB is preventing its members from criticising the nature of the Israeli state, and so preventing them from exercising their right to freedom of speech. It is also adopting rules that are based on an anti-Semitic assumption that all Jews share a political position. The GMB’s adoption of the IHRA definition and examples thus contravenes the union’s own regulations:

The union’s stated purpose includes ‘We will aim to end exploitation, discrimination and injustice.’ (p2) This is not compatible with denying members freedom to speak up against the unjust and discriminatory nature of the Israeli state, nor with rules based on an anti-Semtic assumption. Denying members freedom of speech on Israel also runs counter to the unions aim ‘To promote the social, moral and intellectual interests of our members.’ (p8)